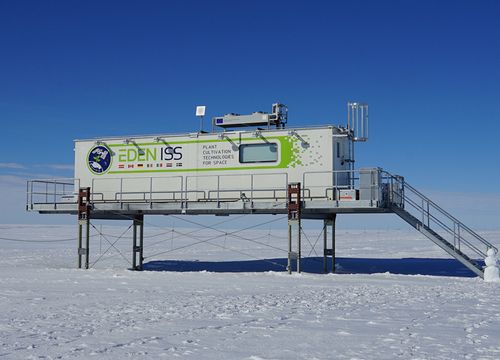 Fresh fruit and vegetables for astronauts – that is the aim of the EDEN ISS project. Under the direction of the Institute of Space Systems of the German Aerospace Center (DLR), a consortioum developed a greenhouse with specialist systems for growing plants. This was set up as a mobile test facility near Neumayer Station III in Antarctica – and right at the heart of it are item profiles and fasteners. The DLR used these components to configure a rack system that provides plenty of space for plants and measuring technology. The stable design ensures a perfect, long-lasting and strong hold. The rack system even survived the long journey from Germany through Africa all the way to the south pole without sustaining any damage. If the on-site requirements change, the construction can be easily and flexibly expanded.

The research project in Antarctica is laying the groundwork for cultivating foodstuffs on the International Space Station (ISS). In 2015, fourteen international organisations, universities, research institutions and companies came together to form the EDEN ISS consortium that would design and realise a greenhouse for future planetary expeditions. The project was led by the Institute of Space Systems, which has been developing concepts for space missions at the DLR’s Bremen site since 2007. Together, the project partners developed a mobile testing facility consisting of two six-metre-long containers. The Institute used components from the item MB Building Kit System to fit out the containers. “We have been working with item products at our Institute in Bremen for many years, and have always had good experiences with them,” says one of the project managers from the DLR Institute of Space Systems. “The assembly process for building laboratory equipment is simple and easy to understand, which means practically any of our employees can work with the item system without having to invest a lot of time in getting used to it.” For the greenhouse in Antarctica, the Institute built a 21-level rack unit using aluminium profiles and matching fastening elements. Each level provides enough space for two plastic boxes next to each other, where fruit and vegetable plants grow. “We are currently cultivating around 200 plants,” says the DLR project manager. “So far, we have primarily harvested lettuce, cucumbers and tomatoes – between four and five kilograms of vegetables a week, on average.” While the plants are grown in one container, the second container houses a service area for the laboratory work, complete with supply systems and a workstation.

A long journey through many climatic zones

The structures inside the containers have taken on various different configurations since the project was launched in 2015. “We did about 90 percent of the fit-out work on the containers at the DLR in Bremen, then transported them to their destination after a three-month testing phase,” explains the project manager. “The containers housed some sensitive systems such as LED lamps that were at great risk during such a trip through several climatic zones and involving several transfers. We therefore set out very stringent requirements for the stability of the rack system.” item offers the perfect solution for these needs. Its profiles and fasteners ensure constructions are stable and sturdy in the long term, even under heavy loads. As a result, the measuring systems and other technical equipment arrived at their icy destination in Antarctica without a scratch, even after the long journey from Bremen via Cape Town. In January 2018, the two containers were mounted on a weather-proof platform about 400 metres south of Neumayer Station III, and connected together.

The rack system is fitted to both sides of the container and primarily consists of Line 6 aluminium profiles and matching Automatic-Fastening Sets and Angle Bracket Sets. This design is much lighter than welded systems, but at the same time extremely robust. The strong hold is achieved by the pre-tensioning in the flanks of the aluminium profiles, which is generated when the profile fastenings are screwed into place. As a result, the durable construction provides reliable stability throughout its service life. The anodized surfaces will not oxidise and are easy to clean. item Conduit Profiles with matching Lid Profiles are used to lay cables and hoses, ensuring they are safe and protected. In addition, the DLR uses an item SystemMobile as a work trolley. A lightweight and stable frame, combined with three strong trays and an ergonomic push handle, provides a mobile supply system for all the working materials needed to grow the plants. The robust transport trolley is also very stable when transporting loads from place to place. Thanks to additional fixings for tools and other accessories, the work trolley can be flexibly adapted to the area and workflows in which it is being used. Its compact construction and easy-running castors also make it perfect for moving backwards and forwards through the narrow aisle between the two racks.

Maximum flexibility – even across international borders

The researchers also dipped into the item building kit systems for the service area in the neighbouring container, which is where the broad international network of item distributors came in particularly useful. “The service and working area is an interface, as our partners in Italy and Canada, for example, contribute their own systems,” says the project manager. “Since the project partners in the various different countries were also using item components, all we had to do was connect together the separate systems and components in Bremen beforehand, which made our job much easier.” item’s wide selection of components and their compatibility were real bonus points. At the same time, it is easy to adapt the systems to changing requirements, as the screw fixings can be removed at any time. This provides maximum flexibility. It is also easy to integrate components from other manufacturers. For example, the light fittings that were specially developed for the greenhouse were equipped with suitable fixings so they could be easily mounted onto the Line 6 groove of the item profiles. “The item components are thought through to the smallest detail and are perfectly coordinated,” says the project manager from the DLR Institute of Space Systems. “The constructions can also be modified quickly and easily thanks to the screw connections and compatibility of the system.” The researchers have a stock of item products on site they can use when minor alterations need to be made. “If more major modifications become necessary, we will order the relevant parts from item and have them delivered by ship,” says the project manager.

Photo 5: View inside the greenhouse

Caption 1: The EDEN ISS greenhouse consists of two containers that were transported through several climatic zones from Bremen to their destination in Antarctica. Source: DLR German Aerospace Center

Caption 2: The mobile testing facility near the Neumayer Station III in Antarctica stands on a platform. The DLR Institute of Space Systems used item components to fit out the interior. Source: DLR German Aerospace Center

Caption 3: One of the two six-metre-long containers houses the plants, while the other is home to a service area for the laboratory work, complete with supply systems and a workstation. Source: DLR German Aerospace Center

Caption 4: The researchers use an item U41M SystemMobile frame as a work trolley for fitting out the container. Source: DLR German Aerospace Center

Caption 5: The rack system is made from item aluminium profiles and matching fastening elements, and is mounted on both sides of the container. Each level has space for two plant boxes. Source: DLR German Aerospace Center

Downloads
BACK TO OVERVIEW